Gideon Mwiti Irea was born on 6th December 1960 in Meru County. He is the MP for Central Imenti Constituency in Meru County. He was elected to the 11th Parliament on an Alliance Party of Kenya (APK) ticket (Jubilee Alliance) in March 2013 elections.

In the National Assembly he is a member of Departmental Committee on Environment & Natural Resources and Catering and Health Club Committee from March 2013.

From 2008 he was an Undergraduate Student of Bachelor of Arts in Community Development at Daystar University, Kenya.

From 1980 – 1982 Gideon Mwiti Irea was a teacher employed by the Teachers Service Commission (TSC).

Up to now he is the Managing Director of the following firms;

In March, 2015 Gideon Mwiti Irea was accused by a lady for rape in his office. The woman allegedly raped by the MP in his Westlands office claimed she had gone to meet Mr Mwiti to discuss a project in one of his business enterprises – The Kenya Land Sacco. 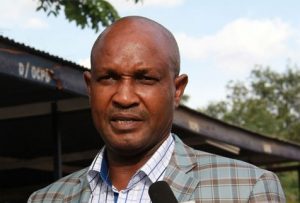 It is alleged that Gideon Mwiti Irea assaulted and raped the lady journalist in his office on March 22, 2015. He was charged in court on April 2, 2015 and was accused of subjecting a former journalist to an HIV test and then later assaulting her.

The MP was released on a Sh100,000 cash bail after denying raping, intimidating and assaulting the married woman.

The case afterwards took a new twist after two independent medical reports indicated there was no evidence of sexual contact between him and the accuser.

Both the DNA report from the Government Chemist and a separate report from the Nairobi Women’s Hospital, where the woman alleged to have been raped by Gideon Mwiti Irea was hospitalised for treatment, had indicated there was no evidence of sexual intercourse from tests conducted.

Gideon Mwiti Irea’s chequered history in the money schemes started in the early 1990s when he opened the Profession and Business Community Sacco (Pabco) at the Nacico Plaza next to the populous Machakos bus station in Nairobi.

Gideon Mwiti Irea lured many investors through a financing scheme that was to assist them to own matatus, a business which was then at its peak.

But hardly two years on, Pabco closed shop with millions of investors’ money. The then City Council of Nairobi Sacco, who were the landlords, closed the offices over unpaid rent after efforts to trace Mr Gideon Mwiti Irea became fruitless.

After the dust had settled, Mr Gideon Mwiti resurfaced and on January 29, 2004, he incorporated the Kenya Akiba Micro Financing Ltd to lend money to entrepreneurs.

They accused the company of carrying out illegal banking business. The company’s accounts in three banks were frozen and the firm was put under lock and key. Kenya Akiba had over 6,000 customers and 300 employees.

Three days later, the company moved to court claiming over Sh930 million in damages and named 13 senior police officers and CBK employees as having been involved in the raid. CBK and the Attorney-General were named as defendants.

Mr Gideon Mwiti Irea and three other directors were arrested and charged before a Nairobi court, accused of carrying out banking business without approval, contrary to Section 3(1) and 3(2) of the Banking Act and unlawfully accepting deposits without valid licence contrary to Section 16(1) and (9).

On May 5, 2012, Justice Alfred Mabeya ordered CBK to pay the micro-finance firm Sh1 billion after the court found the regulator acted arbitrarily in closing down the business.