Conjestina Achieng was born on 20 October 1977 in Umiru village, Yala division, Siaya County. She is a former famous female boxer in Kenya who had been nicknamed “Hands of Stone” and was once ranked number five in the world. She played in the middleweight division

She became the first African woman to hold an international title when she beat Ugandan Fiona Tugume to take the vacant WIBF Middleweight title.

Conjestina Achieng took to the ring in 2000 after graduating through the youth soccer ranks in Nairobi’s Makongeni Estate, inspired by her elder brother who was a member of the national boxing team. “Being a boxer, he trained and nurtured me, taking me away from playing football to boxing. I trained in boxing for one month, before I was able to face my opponent in the amateur ranks. As an amateur, I once technically knocked out a Ugandan opponent, Sharon Akinyi.”

After seven amateur bouts, “Conje” made her pro debut on 8 June 2002 in Nairobi, winning a four-round decision over Naomi Wanjiku of Kenya.

Conjestina Achieng was a pupil at St. Jesus Primary School in Yala. She did not proceed with her studies.

Conjestina Achieng is the fifth born in a family of ten. Her father Clement Adalo is a retired medical officer and her mother is Gertrude Auma. Her elder brother, Joseph Kusimba is an ex-boxer who runs a boxing club in Mathare. She has a son who lives with her mother.

In January 2011, Conjestina Achieng’s father sent an appeal to Kenyans to help him take her to hospital after her behaviour deteriorated from the norm. According to her father, Conjestina had removed her son from school, set ablaze to all her boxing gear and disposed of all the equipment from her gymnasium, which she had opened in 2009. She was admitted at the Mathari hospital in Nairobi which specialises in mental health care. She was later released. 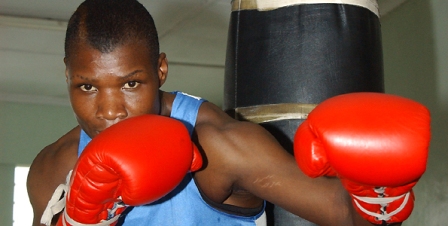 On 4 September 2012. a story ran on Citizen TV showing Conjestina in a state of confusion and utter despair. The former boxer showed off her belts. She was said to be living in poverty having not paid her Ksh 2000 rent for 4 months.

She was under the care of her younger sister. Conjestina was later taken to the Mathari Hospital by Ida Odinga. A popular campaign on social media raised enough money for her to move into a more comfortable dwelling.

NTV Churchil Show host and Comedian Daniel Ndambuki personally donated Ksh. 180,000 to pay her rent after public pressure reminded him of a promise he had made to support her.

In May, 2016 Villagers in Conjestina’s rural home in Siaya started living in fear as the ex-boxer who is mentally unstable is causing havoc after fleeing from a rehab facility in Kisumu.

Congestina Achieng was being treated at Foundation of Hope Rehabilitation Centre in Kisumu until she escaped.

The former boxing great returned to her rural home in Yala, Siaya County to give villagers nightmare. Conjestina’s brother, William Ochieng, confirmed to the Star that his sister had totally gone wayward.

Ochieng says Conjestina is punching everyone even without provocation. With her boxing prowess, Conje can inflict serious damage on villagers.

He further revealed Conjestina recently confiscated pangas from primary pupils who were going to slash grass in school.

His brother appealed for help to return Conjestina to the rehab facility saying he feared his sister was endangering the lives of villagers.