Dr. Joyce Cherono Laboso was until 8th August, 2017 the Deputy Speaker of the National Assembly of Kenya and the Member of Parliament for Sotik Constituency.

Dr. Joyce Laboso was until 29th July, 2019 the Governor of Bomet County after trouncing her strong rival Mr. Isaac Rutto in the August 8th, 2017 Gubernatorial elections in Kenya.

She died of cancer in The Nairobi Hospital after having undergone intensive treatment in London, UK and India. God rest her soul in peace.

Between 1980 and 1983 she was an undergraduate Student of Kenyatta University pursuing a degree in B. Ed (arts) in French, literature and education.

Between 1984 and 1985, Joyce Laboso did a Postgraduate Diploma in teaching French Language at the University of Paul Valry in France.

Between 1989 and 1991, she proceeded to do an MA in teaching English as a foreign language in the University of Reading in the UK.

Between 2002 and 2006, she pursued her studies at the University of Hull in the UK by undertaking a PhD in gender and language education.

Joyce Cherono Laboso was High school teacher of Kipsigis girls’ high school teaching French between 1985 and 1989. Between 1990 and 1991 she was an Assistant lecturer of Egerton University.

In 1991, she became a full Lecturer of Egerton University where she maintained that position upto between the year 2000.

In 2001, Joyce Laboso became the Assistant dean of students of Egerton University until 2002 when she went to Farrow House Education Center, Hull, United Kingdom and became a special needs lecturer. She lectured between 2003 and 2006.

In 2007, Joyce Laboso was the coordinator, communication and media, library and information studies programmes at Department of Language and linguistics at Egerton University and served as a Commissioner of the National Commission on Gender and Development until when political career came calling. 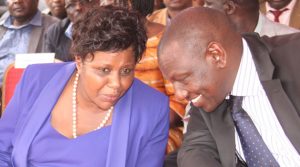 Joyce Laboso was shopping in a supermarket in Nakuru after a lecture at Egerton University when the shocking news of Lorna Laboso’s, her sister, death hit her very hard. She came to know of her sisters death through the TV. Lorna Laboso who with the then Roads Minister, Kipkalya Kones, died in a plane crash on June 10, 2008.

After the burial rites the Orange Democratic Movement (ODM) insisted that Lorna Laboso’s seat and that of Kipkalya Kones be retained within their respective families to honour their contribution to the party’s campaign in the run-up to the 2007 General Election.

Joyce Laboso was elected to the Parliament of Kenya to represent the Sotik Constituency in a by-election held on September 25,
2008. She succeeded her sister, Lorna Laboso, who died in a plane crash.

A nominee of the Orange Democratic Movement, she beat 11 other contestants after she garnered 23,880 with a vote margin of 10,000 over her closest challenger, retired Brigadier Alexander Sitienei (a former aide to Daniel arap Moi) who received 13,843 votes.

In the run-up to the 2013 general elections she was still adamantly in ODM. It was therefore a timely move, when in late 2012, she unceremoniously ditched ODM and threw her weight behind Ruto’s URP.

In 2013 she won again the SotiK MPs seat. But it is not only URP loyalty that has kept her afloat, her development record has been impressive. Construction of Sotik-Borabu highway remains a key project that has bolstered the MPs profile. The construction of Lorna Laboso memorial school, an ultra-modern girls school built under the Economic stimulus programme, is yet another.

In Parliament in 2013, the MPs elected her as the first female deputy speaker with majority votes. She did not have to go for round two of the vote.

The almost expected declaration of Dr.Joyce Laboso to vie for Bomet gubernatorial seat in 2017 has caused alot of mixed reactions and uproar both in social media and in every political discussions within the county.

Joyce Laboso marriage to Edwin Abonyo, a former manager with Finlays has been used by her rivals to discredit her. Abonyo is a Luo and this provided an arsenal for Laboso’s rivals to describe her as more inclined to Luo Nyanza than the Kipsigis.

In the run-up to the March 4 General Election, her rivals sarcastically referred to her as ‘Cheplemindet’ (Luo lady)

However, in 2008, Dr. Joyce Abonyo dropped her surname ‘Abonyo’, back to Joyce Laboso, yet she is married to Mr. Abonyo who is a Luo by tribe from Nyakach in Nyando district. The couple have grown up children and have been happily married for many years.

Political pundits and observers in Bomet and Buret were quick in alleging that Dr. Joyce Abonyo had deliberately dropped her family name for political expediency, something which they have maintained is in bad taste. This will be a very big test for her when she campaigns for her Bomet County Governor’s seat.

The Kipsigis people don’t entertain any of their daughter who is married outside the community to come back home and reclaim political leadership or traditional chieftains.

The late Lorna Laboso made it to Parliament because she was being treated as unmarried woman. Even her brief, but broken down marriage to Mr. Kipsumeywek who is the father of her only son had no traditional or cultural stigma because her estranged husband was a Kipsigis tribesman unlike Dr. Joyce Laboso who is a married to a Luo.

Dr. Joyce Laboso therefore will be forced to work over time in order to convince the rural folks in general and the electorate in Bomet in particular that she is not a political turn-coat owing to her marital status.

Joyce Laboso’s late mother, Mrs Rebecca Laboso, was a prominent farmer and former councillor. She died while undergoing treatment at Nairobi Hospital. Her father also passed away and was a tea farmer.

She has Three sisters and two brothers.

Dr. Laboso is married to Mr. Edwin Abonyo who is a Luo by tribe from Nyakach in Nyando district. Mr. Abonyo is a former manager with Finlays in Kericho. The couple have grown up children and have been happily married for many years.